In 2009, when I was 31 years old and still nursing my one-year-old daughter, I found a lump in my breast. Then, I learned that I was pregnant again. I just knew something was wrong inside of me. Soon afterwards, I was diagnosed with stage III breast cancer, and I underwent multiple surgeries and chemo while I was pregnant.

Despite everything, I delivered my “chemo baby” and she was healthy. I got infections after every surgery, including urinary tract, kidney and staph infections, and infections in my eyes and under my fingernails. I was on antibiotics all the time and terribly depressed. I continued the chemo and took Tamoxifen (a drug that blocks the actions of estrogen) for another six weeks, but it made me feel ill and crazy. Enough was enough. I became pregnant with my third child and was so excited because I had a stronger reason not to take the medicine.

When I was five months pregnant, I came across the documentary The Beautiful Truth and something just clicked inside of me. I was starting to prepare for the therapy, but a week later, my husband found me in a pool of blood in the bathroom. I had lost my baby. I knew it was because my body was so toxic from all the treatments, stress and worry. I believe that if I had found the Gerson Therapy earlier, it could have saved that little baby of mine. The doctors said I should not, and probably could not, have any more babies.

I was determined to get healthy, to prove them wrong and to have my three babies. That’s when I started the Gerson Therapy and made a choice to be happy and healthy.

“I was determined to get healthy, to prove them wrong and to have my three babies. That’s when I started the Gerson Therapy and made a choice to be happy and healthy.”

I followed the protocol for chemo pre-treated patients. I eased into the juices, starting with just a few each day. I gradually increased to 10-13 juices a day and 2-3 enemas on most days. For a few days, I felt like I did after the chemo treatment: really tired and achy in my bones, with headaches and no appetite. I had to force myself to drink the juice and eat the foods. The bathroom smelled really bad, but I started feeling healthier every day after a short time.

Time, energy, understanding and other people’s opinions were big hurdles. I tried to wrap my brain around what had to be done, to read the books, and to understand and trust why the therapy would work. I tried to avoid family members, friends and doctors who wanted to talk me out of doing the therapy. They wanted me to trust the allopathic doctors, like they did. I had to re-learn everything I thought I knew about food and medicine. Cravings for salt, fat and sugar were also big hurdles to overcome. I had to stop eating out, and eating dinner with friends meant bringing our own food.

My ceiling is still stained from carrot and apple juice explosions, but now I have juicing down to an art. After I started feeling better, it took no time at all to muster the energy to do all of the work with little help. After a few weeks, everything that had previously tasted bland was like an explosion of flavor for me. I craved broccoli and carrot juice!

“After a few weeks, everything that had previously tasted bland was like an explosion of flavor for me. I craved broccoli and carrot juice!”

In the beginning, I found the hard work and the negative opposition from others very stressful, but I had support too. All of my family lives in Australia. My mother came over for three months at a time, for a total of nine months over two years. She was a tremendous help with the kids. My aunts gifted me a Norwalk juicer. My husband and I do all the daily work the therapy demands. After detoxing for only a short while, all my mood swings were for the better.

It took time to kick old food cravings and habits, but the growth I felt was both gradual and grand. I went through a spiritual awakening on the therapy.

A few months into the Gerson Therapy, I became pregnant again. After consulting with the Gerson Institute, I decided to continue the therapy. Even though there were few guidelines for a pregnant patient, I believed it was what the baby and I needed to heal and grow. The documentaries I watched, the books I read and the baby growing in my belly gave me the strength and inspiration I needed to continue. I continued the therapy at home until the day I went into labor. I even did a coffee enema that morning! My baby was born, weighing just less than eight pounds, and he was perfect. His skin was glowing, he didn’t cry for but a minute and he glowed with health. And so did I.

Before starting the therapy, I had needed to see a chiropractor 2-3 times a month. Now, I have no back pain and do not go to the chiropractor. I am no longer depressed. The whites of my eyes cleared up and they are no longer streaked with red blood vessels. All the infections I had in my eyes, skin and under my nails have cleared up and I have not had a urinary tract infection since I started the therapy over three years ago.

None of the many doctors I saw and talked with about the therapy with were supportive. Most were dismissive of any nutritional approach and even more were aggressively opposed to it. I stopped seeing my cancer doctors after I fell pregnant on the therapy and only visited my obstetrician.

Even though my husband didn’t do the therapy, he did start juicing, became vegan and did some coffee enemas. Just doing those things has cleared his chronic sinusitis that he suffered from for ten years. Eating and juicing this way has made my children mild-mannered and well-behaved. My first daughter received the principal’s award last year at her graduation for being the overall nicest, kindest and most helpful child. They never get sick, either.

I still juice and take coffee enemas every day. I take some supplements and eat a whole food, plant-based diet. I do not eat animal products or processed foods. I live a simple, family-friendly lifestyle and enjoy simple activities with my kids and husband. I have given up working myself into the ground to chase the American dream.

I am just thrilled that this therapy and living this way is not only the healthiest thing we could be doing for our bodies but also the single most effective thing we can do to heal our mother, Earth. I believe I am fully recovered and feel I could carry the world on my shoulders.

That is why the Gerson Therapy is a real beautiful truth. 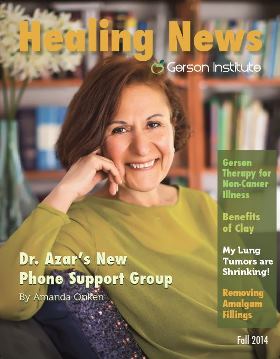 This article originally appeared in the Fall 2014 issue of the Gerson Institute’s quarterly newsletter, Healing News. Healing News goes out to all Gerson patients and donors.

Want to receive Healing News? Make a donation–of any size!–and we’ll send you the newsletter.

You’ll receive valuable health information you can share with friends and family. Plus, your contribution will make it possible for the Institute to help Gerson patients with programs like our Juicer Loaner program.

Are you a current Gerson patient? Then email Liz Cook at [email protected] and we’ll start sending you Healing News–for free!

I love the idea of the gerson therapy and I have seen what it has done for my daughter who was very sick with Lyme disease . I believe in the power of nutrition and healing .

Wow that is awesome! I didn’t know you can do the Gerson Therapy while pregnant! Here is another story of a pregnant woman who did the therapy. The video does not show her talking about the therapy only her mastectomy, but in the text, it explains what she did! Visit: http://www.dailyfreeman.com/lifestyle/20140711/this-tannersville-woman-was-pregnant-and-had-cancer-this-is-what-she-did

what a beautiful story of love and courage!

Is it possible to drink goats milk on the GT? Many thanks